As we transition into the fall back-to-school season, it is worth taking a look at the growing catastrophe of student debt in the USA. Over the last 20 years federal student loans in the USA have grown exponentially. Average debt per student loan borrower has risen from ~$11,000 to ~$35,000+ in under two decades, while median income (even amongst only those with at least college degrees) has risen tepidly. Combined, this has produced the terrifying chart below.

A note on data: All dollar values are nominal (not inflation adjusted). Some data points were unavailable and so were extrapolated on a straight-line basis. All data sources are identified below.

In 2020, the amount of student loan debt that is delinquent or in default is almost equal to the size of the entire student loan market from only 17 years ago. How much longer can this chart increase? Federal student loans are not even cleared in bankruptcy, and so this escalating mountain of debt - including the delinquent/default debt - will carry on as a burden for much of the adult life of the borrower. This debt burden is already becoming a national crisis, and combined with economic downturn and high unemployment, we are setting up for generations of Americans to be trapped under a nearly inescapable mountain of debt, unable to build wealth. 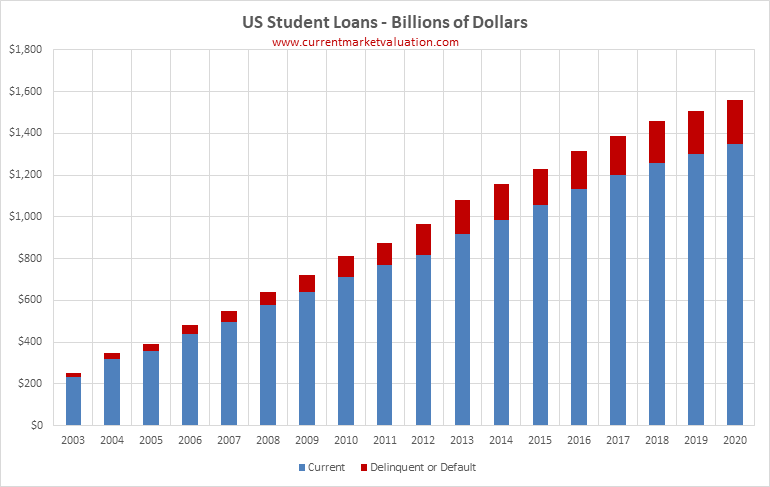 FinViz offers best-in-class stock screening and valuation analysis tools. Easily and instantly screen the entire US stock market for companies with whatever valuation metrics you desire. [E.g., "Show me all stocks with a price-to-book ratio under 2, positive EPS growth, and institutional ownership of > 80%] - all for free.

Is all this debt even worth it? The below chart, covering the same time period, looks at the average amount of student debt held by each individual borrower against the median income that borrower receives. (Note that median income is for combined sexes, all ages, and only for those with at least completed college degrees). This chart doesn't investigate if taking on all that debt is a good deal or not - for that we'd need to look at the lifetime income disparity between college graduates vs high school graduates. But here we can at least see that only 17 years ago college was a much better deal than it is today. 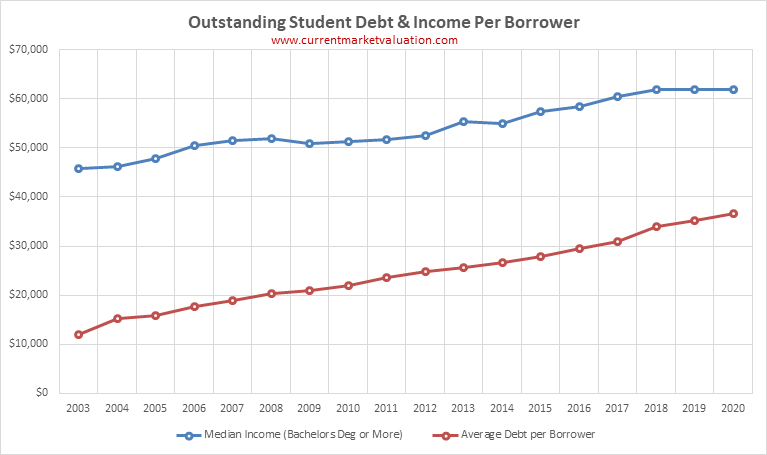 The problem isn't entirely due to rising tuition costs, either. Tuition costs have indeed risen sharply; across all public, private, and for-profit institutions tuition has doubled in the last 17 years, far outpacing general inflation. Many institutions, particularly prestige universities, have risen much faster than that. But over the same time period debt per borrower has more than tripled. 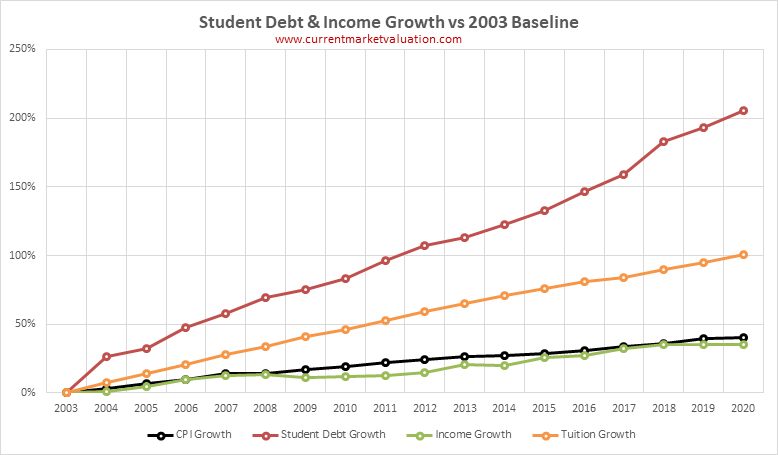 We are saddling a generation of students with an exponentially-increasing burden of unbankruptable debt. This is absolutely unsustainable, and it's difficult to imagine this ending any way other than a revolutionary political solution of just wiping it all out. At this point, the entire $1.6 trillion dollar student loan balance should be viewed as a government liability and tacked onto our national debt. It is only a matter of time.

Data in the charts and analysis above is summarized in the table below. Highlighted cells indicate where data was not immediately available and so was estimated using a straight-line extrapolation.