Margin debt is money that investors borrow in order to invest in stocks. As of October 31, 2022 (the latest data available), total US margin debt was $650 billion, which represents a decrease of $359 billion year-over-year.

Since margin tends to increase as the size of the stock market grows, it's more useful to look at the margin in terms of the total market size. Using that view, over the last 12 months total margin debt decreased by 0.91% of the value of the entire US stock market. That change is 1.3 standard deviations below historical average, indicating that the stock market is currently Undervalued.

In short, the US stock market is deleveraging at a rate consistent with a Undervalued market.

This is summarized in the chart below. For additional context and analysis on this model, continue reading. 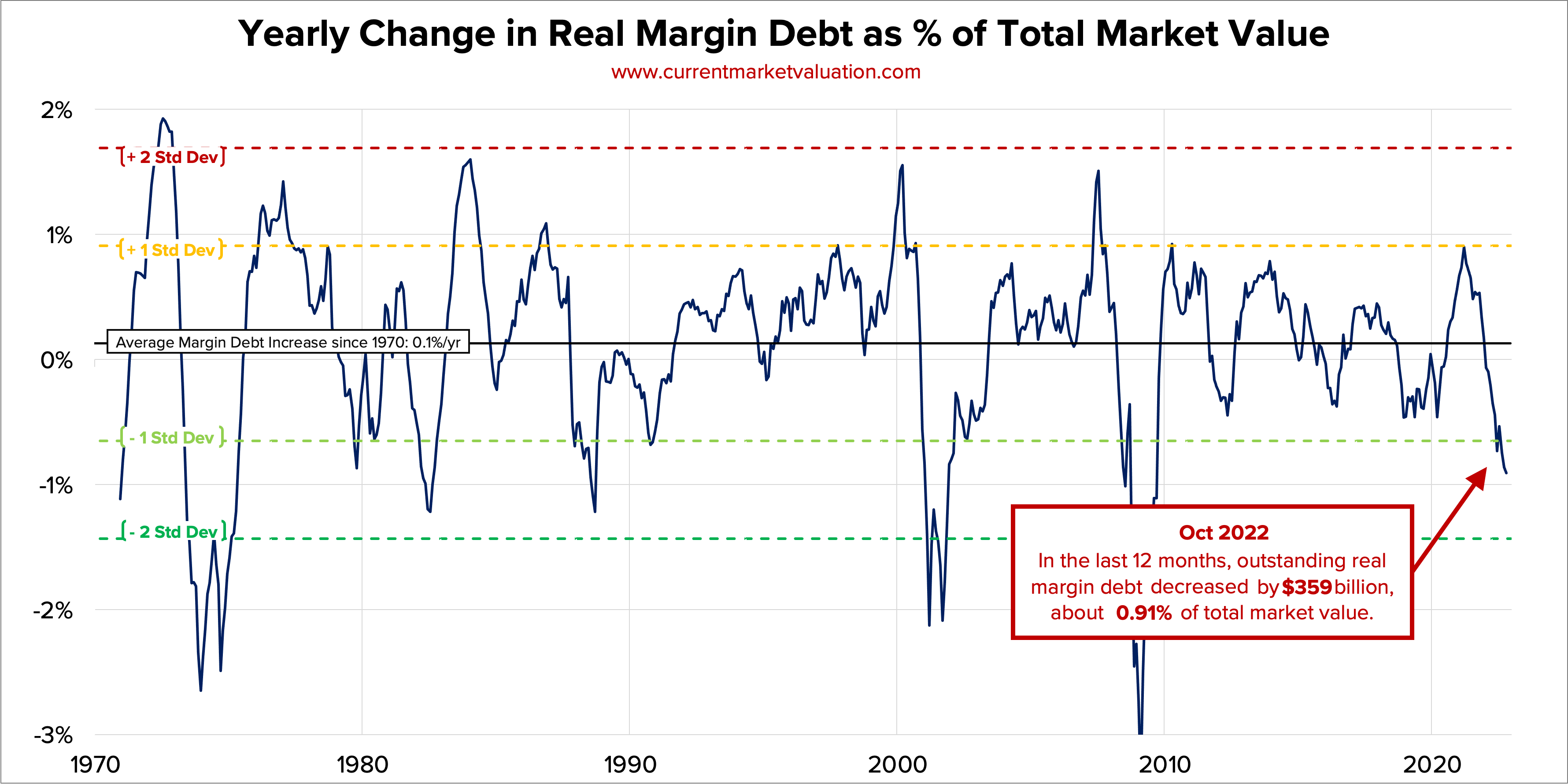 Margin debt is the money that investors borrow in order to invest in stocks. This debt is usually collateralized by the stock investments themselves. When total margin debt increases, the overall level of risk in the stock market increases as well. Then, if the stock market falls, the value of the collateral behind margin loans falls, and so investors need to pay back the loan (a "margin call") by selling stocks, which itself drives the overall market lower. Because of this positive feedback loop, the higher overall market margin debt increases, the further and faster one could expect the market to fall during the next downturn.

Even without the margin-call mechanism that can accelerate market declines, looking at overall margin levels is useful since this is a proxy indicator for market momentum. High margin shows that investors are extremely bullish - so much so that they are willing to borrow money in order to invest in additional stocks. Whereas falling margin levels suggests the opposite, that in aggregate investors have little faith that the market will continue to rise, and so are not willing to borrow money (and pay interest) in order to invest further.

All data is cited below, and comes from FINRA and NYSE. Margin debt levels are published monthly (after some delay), with the most recent available data being from October 31, 2022.

Total margin in US accounts since 1970 is shown below. All figures throughout this article are inflation-adjusted to reflect present day dollars. As is shown, margin was seldom used prior to the mid-90's, when it began ramping exponentially ahead of the internet bubble. After the crash margin remained in high use, and reached an even higher peak ahead of the Great Financial Crisis in 2008. This pattern repeated after the GFC crash, and margin has now climbed to the highest levels ever recorded. Of course, the total size of the US stock market has grown dramatically during this same timeframe, even adjusted for inflation. It makes sense that the amount of cash being borrowed to invest in stocks would rise as the total size of the market increased. The below chart looks at total margin debt as a percentage of the total value of the US stock market (estimated via the Wilshire 5000 index). Rather than look strictly at the level of overall margin, we want to get a better sense of how quickly margin is changing over time. Are investors gaining confidence, and borrowing more cash in order to increase long positions? To do this we look at the rolling year-over-year change in total margin debt. That is, how much has margin debt changed in the prior twelve months? From the chart above it looks like margin debt has gone out of control in the last few decades. Recall from Figure 2 that as a percent of the value of the total stock market, margin debt has risen significantly since 1970, but actually not very much since 2000. Once again, let's take a look at the above chart (year-over-year change in margin debt) but proportioned to the size of the stock market. Change in Margin vs Market Returns

Our main interest is in what margin levels might say about overall market valuation. After a giant run up in margin debt, we should expect the market to underperform, since the selling pressure during a deleveraging will accelerate a market correction/crash. Below is the same chart as in Figure 4 above, only now with the 12-month returns of the stock market layered on top. Above we can clearly see that a very quick run-up in margin debt precedes periods of negative market returns.

So what does this say about current valuation? Peaks in margin run-ups tend to correlate with peaks in market value. Large increases in margin indicate a highly-levered, more volatile stock market, poised for unwinding declines.

Per the model, the most recent data from October 31, 2022 shows total margin debt of $650B, a decrease of $359 billion over the prior twelve months, (0.91% of the value of the total US stock market). This decrease is 1.3 standard deviations below normal, indicating the stock market is currently Undervalued.