Aswath Damodaran: So the real debate is: are T-bond rates at 1.5% sustainable? That is the core. It's not whether the stocks are overpriced - it's whether the level of interest rates we're observing are sustainable given the fact that inflation seems to be back.

He continued on to say:

Aswath Damodaran: And we can debate about whether [inflation will] drop back down to 3% or stay at 5%, but it's not going to go back to half a percent. And to me a world in which inflation is 3% and the T-bond rate is 1.5% is not a world that is sustainable, because you're buying bonds and accepting a rate that is less than the inflation rate.

Well, inflation indeed seems to be back. Yesterday's print of 6.2% year-over-year price level changes is the highest inflation we've seen in a generation. All the subsequent commentary I've been seeing is focused on the cause of the inflation; if it's only a temporary bump caused by supply chain shortages and pent up post-covid deman, then we can expect inflation to fall naturally over time back to a more regular rate. But if it's not transitory, then the Fed needs to act fast and raise interest rates in order to temper the overheated economy and get inflation back in check.

FinViz offers best-in-class stock screening and valuation analysis tools. Easily and instantly screen the entire US stock market for companies with whatever valuation metrics you desire. [E.g., "Show me all stocks with a price-to-book ratio under 2, positive EPS growth, and institutional ownership of > 80%] - all for free.

Regardless, Prof. Damodaran's comment remains stuck in my mind, and I wanted to look at the historical precedent for when inflation rates have exceeded T-bond rates. For the obvious reason cited by Prof. Damodaran, this is fundamentally unsustainable - over the long term investors should not be willing to buy bonds at a rate lower than inflation. The below chart examines the inflation rate versus the 10 year T-bond rate, in order to inspect the relationship between the two.

I was actually a bit surprised at just how infrequently this has happened over the last ~60 years. Only a handful of times has inflation surpassed T-bonds. Not only that, but that chart highlights the severity of the current dislocation. The current spread between inflation and T-bonds is just nearly tied with the largest spread ever recorded, back in the mid '70's. Additionally, this gives some color to the prior durations of such spread inversions, where inflation was higher than T-bonds. You can see from the gray bands that this condition only lasted a few years in the past, generally no longer than 18-24 months. Our current period of inversion began in August 2019, though there was brief gap earlier this year where rates normalized. Still, that puts us on track for being quite close to the average duration of the rate inversion. 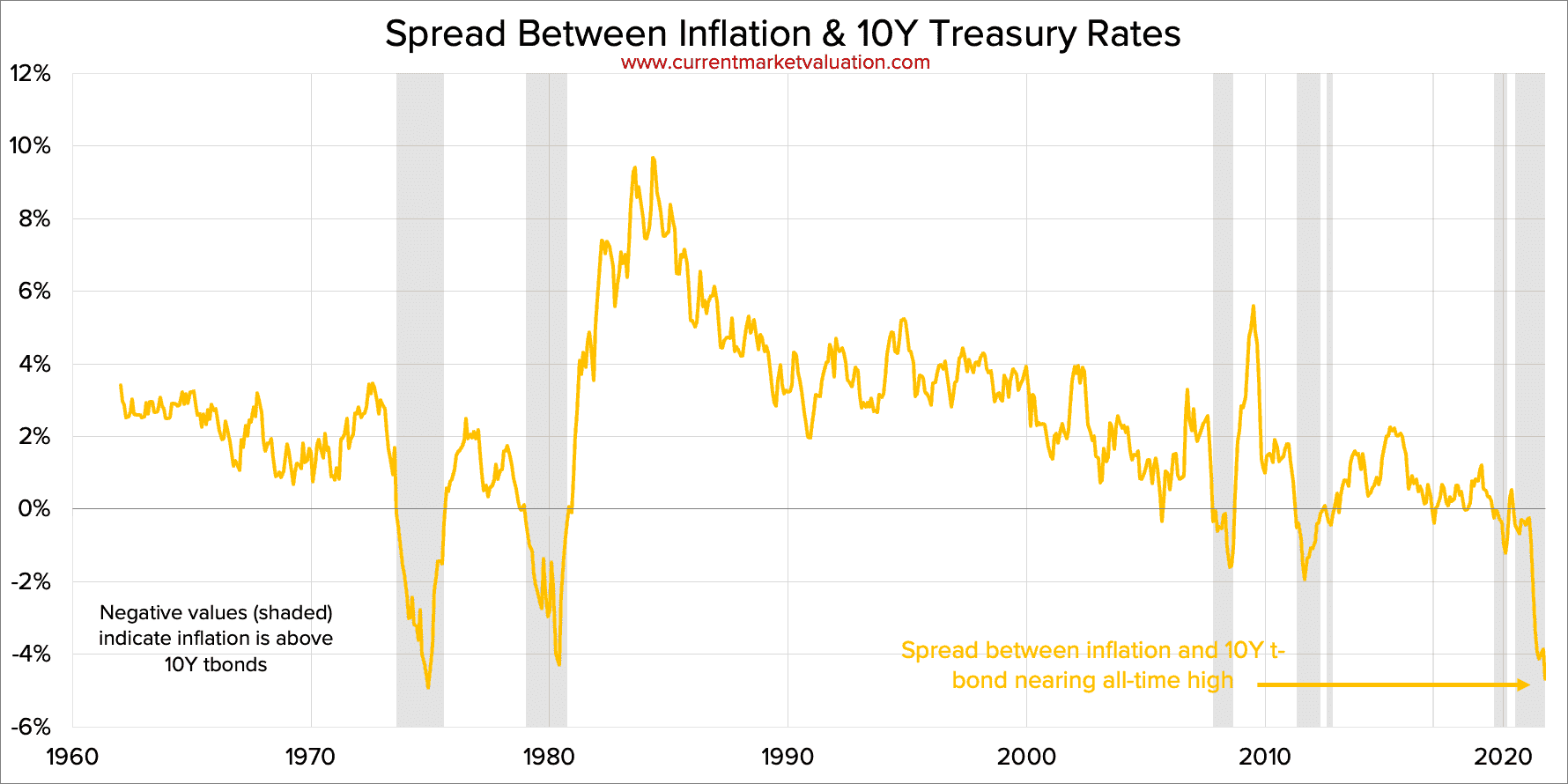 As always, coming back to market valuation, I wanted to look at S&P performance during/after these periods where inflation outpaced T-bonds, and it's not a pretty picture. In most cases the market performed quite poorly during (or shortly after) the inverted spread. 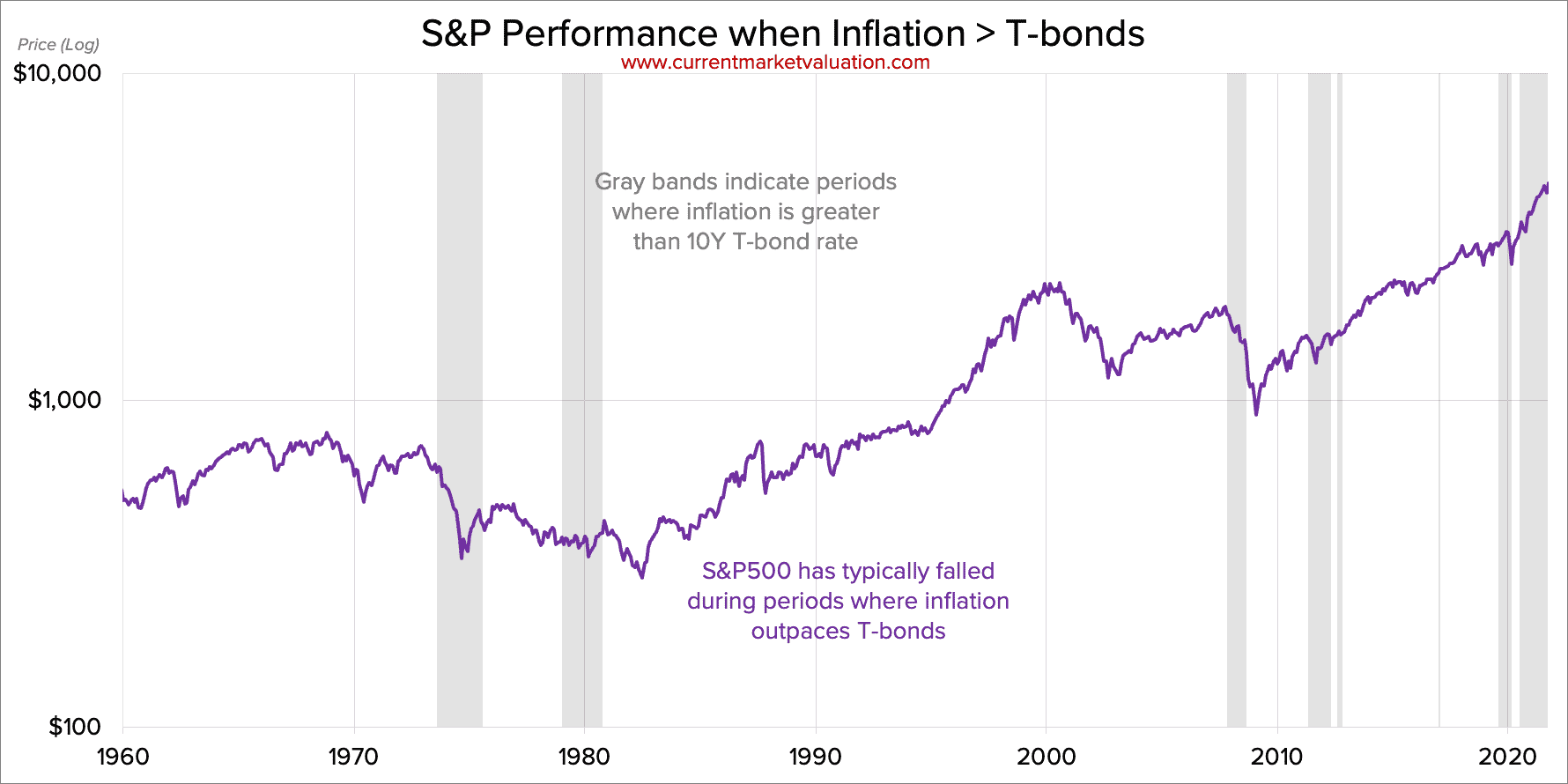 Of course, today's investors don't seem too worried. The bull market hiccuped a bit on the inflation news, but quickly recovered and continued extending its incredible run. I suppose the market is betting that inflation is indeed transitory and the Fed won't need to bump up rates too quickly as a response, since higher rates will necessarily damper S&P500 performance. I'd be surprised how much longer that theory can hold if inflation stays above 6%.

Explore our other fundamental valuation indicators.

A model of S&P500 historical performance relative to 10Y Treasury rates, currently indicating that the US stock market is Fairly Valued.